Girl Power leads the way at the In-Comm Training Awards 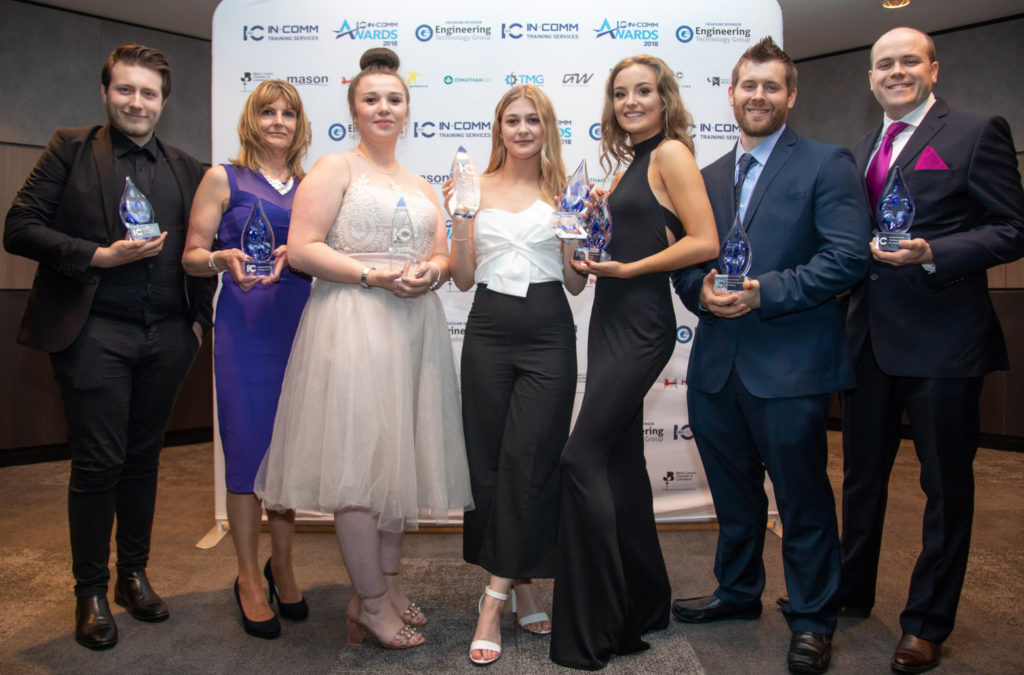 Girl power was at the fore last week, with two female apprentices claiming the main prizes at the In-Comm Training Awards.

Integrated Water Services’ Laura Thacker was named as the ‘Most Improved Learner of the Year’ having overcome several setbacks to develop her skills and excel in her apprenticeship, whilst Maria Collins from IMI Precision (Norgren) secured the ‘Outstanding Learner of the Year and Peter Wood Memorial’ title.

The latter impressed an industry-led judging panel with her level of dedication to work and the way she has employed excellent management and organisational skills to take control and successfully complete projects.

They were joined on stage by Caterpillar Shrewsbury’s Lauren Ball, who is one of the first apprentices in the country to be trained at the Marches Centre of Manufacturing & Technology in Bridgnorth.

Despite being the only female in her first cohort, the ‘Learner of the Year In-Comm Academies Engineering’ has shown a real appetite for new challenges and often leads from the front, carrying out every job to the best of her ability.

Bekki Phillips, joint Managing Director at In-Comm Training, commented: “There has been a lot of media debate about the effectiveness of the ‘Apprenticeship Levy’, but one thing that is not in question is the important role we all play in developing the engineers of the future.

“Apprenticeships offer a fantastic way for companies to develop their own staff and for young people to become competent craft and technical engineers by being exposed to all levels of education and a host of practical scenarios.

“If they go all the way to Degree level through this route, they’ll also save £100,000 on average when compared to people going to University.

“The In-Comm Training Awards are designed to showcase the best vocational learners in the Midlands, highlighting individuals who have gone above and beyond, mentors that have given blood, sweat and tears in developing their younger members of staff and employers who have put their money where their mouths are.”

She continued: “This year will be remembered for girl power, with our two main prizes going to Laura and Maria, with Lauren also picking up one of the awards. These girls are fantastic ambassadors for women in engineering and will go on to have great careers in industry.”

Other winners at the In-Comm Awards 2018 included:

The focus was also on companies, with Birmingham-based precision metal stamping specialist Brandauer taking the ‘Employer of the Year’ title for the way it has made apprentices more than 15% of its total workforce, helping it to retain specialist skills and reduce the average age of staff to just 44 in the process.

Headline sponsor for the event was the Engineering Technology Group (ETG), one of the UK’s leading machine tools suppliers. Chloe Reeve, Technical Co-ordinator and former apprentice, was one of the judges for this year’s competition.

“The quality of the entries was fantastic, with lots of stories of young people saving their companies money and solving production bottlenecks – even mentoring their peers who might be struggling on certain topics.”

She concluded: “The winners and the nominees are excellent ambassadors for recruiting the next apprentices and the engineers of the future.”

Over 350 people attended the In-Comm Training Awards, held for the first time at the ICC in Birmingham.

Guests were given an insight into life behind the scenes of Robot Wars by Grant and James Cooper, before being entertained by Black Country royalty in the shape of Doreen Tipton.

Sponsors for the evening included Black Country Chamber of Commerce, B Mason & Sons, Classic Motor Cars, Grainger & Worrall, In-Comm Training and Manufacturing Group, Jonathan Lee Recruitment, Made in the Midlands, My Workwear, Salop Design & Engineering and the University of Wolverhampton.